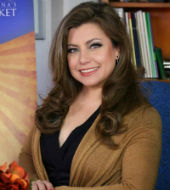 Ms. Villalobos was recently named President & CEO of the Arizona Hispanic Chamber after
serving as the Vice-President and Foundation Executive Director for seven years. In this role,
she is responsible for the strategic growth initiatives of the chamber. She is also the operator
of the Phoenix MBDA business center. Her background and experience as a corporate
marketing executive and as an entrepreneur result in a unique combination of skill and talent.
She is also Editor of eighteen research publications over the last seven years including the
annual DATOS: State of Arizona’s Hispanic Market (2012-2019), DATOS Tucson (2012-
2015), Minority-, Women-, Hispanic-, Family-owned Business Enterprise Reports (2012-
2013) and the AZ Supplier Diversity (2012), Employee Resource Group (2013), Sustainability
(2014), Global Trade Best Practices (2015), and Minority Business Economic Indicator
(2017-18) white paper series.

Ms. Villalobos is the founding principal at ResearchByDesign, a marketing research firm specializing in primary qualitative
and quantitative research. She works closely with client partners to develop category specific studies as the foundation for
marketing strategy decision-making. She was selected as the 2015 Latina Style Inc. Entrepreneur of the Year and ASU
Entrepreneurship & Innovation Visionary Awardee, 2017 Achieving My Purpose: Celebration of Women award recipient,
2018 Cox Communication Hispanic Heritage honoree and a Phoenix Business Journal Outstanding Women in Business
recipient.

Previously at Phoenix Marketing International based in Rhinebeck, NY, Ms. Villalobos developed all communication materials
related to the company’s products and services. She continues to work with PMI and other clients as a research consultant
and account planning strategist. Ms. Villalobos is the former Director of Accounts at Latin Force LLC, purchased by Goldman
Sachs, a business strategy firm specializing in the Hispanic marketplace. In that capacity, she supervised strategy development
for clients such as Wells Fargo, National Football League (NFL), Kraft Foods, and ING. Her expertise is in the development of
Integrated Multicultural Communication Platforms and ROI Business Case Assessments. She led the Wells Fargo account
and developed a Hispanic go-to-market plan by conducting proprietary research, reorganizing infrastructure, analyzing product
proxy data, and formulating a customized ROI model with targeted product suites. At NFL, she was positioned as an in-house
consultant to determine the most appropriate Hispanic segmentation model, craft relevant messaging and channels, examine
sponsor needs and resources, facilitate media relationships and build the first-ever Hispanic platform for the 2006/7 season.
She is also the former co-owner of Cuellar, LLC dba ShopRite Supermarket of Passaic/Clifton, an annual $50 million retail
enterprise. She made this transition from the position of Executive Vice-President at ECO, Inc with the sale of that company
and its subsidiaries President Supermarkets, Presidential Caterers and LatinoNetShopper.com.

Ms. Villalobos is scheduled to complete her doctorate at the University of Southern California in December 2019. She
completed a Master of Arts in Communications degree at Seton Hall University with honors. She is also a graduate of the
University of California, Los Angeles with a double major in Linguistics and Psychology. Scholastic achievements include a
scholarship to the Oxford University Study Abroad program, nomination of fellowship for a summer thesis on Quechua
(language of the native Incas), and Dean’s Honors. Ms. Villalobos is also a national bronze medalist in collegiate
Lincoln/Douglas debate and a state silver medalist in team debate. She is a first-generation Mexican-American and the only
child of an elementary school teacher and truck driver.

Ms. Villalobos began her career with Casanova-Pendrill, one of the largest Hispanic advertising agencies in the country. Her
responsibilities included management of on-air and promotional activities for Coors Brewing Company. Later at Arvizu
Advertising, Ms. Villalobos supervised the Account Services department and managed $15 million in billings as Associate
Director. She handled national accounts such as MasterCard International, Banco Popular and Coca-Cola. She was then
courted by a client and joined the Telmex/Sprint International Joint Venture as Marketing Manager reporting directly to the
Chief Marketing Officer. In this capacity, she developed and implemented marketing strategies, managed a $20 million budget
and supervised agencies in Mexico and the U.S. Other assignments at Sprint included partnership management of
EarthLink/Sprint. Ms. Villalobos then became Brand Manager of the Hispanic Line of Business for Capital One Financial. She
was accountable to the Vice President for the development of the company’s programs within the Latino market. Her
responsibilities included management of advertising agencies (in the U.S. and Mexico), internet channel development, and
media/public relations.

Ms. Villalobos was a volunteer member of the Advisory Council of “Juntos en Salud,” a community health initiative administered
by Catholic Health Charities in the city of Passaic, NJ. She was on the board of the New Jersey Regional Chamber of
Commerce and a member of the Republican Eagles. She is a former member of the Board of Directors for St. Joseph’s Hospital
Foundation in Paterson, NJ, Mental Health Association of Essex County, Montclair, NJ, and Girls, Inc. of New Jersey. She is
currently a member of the AZ Community Foundation Latina Giving Circle and Vice President of the St. Thomas Aquinas Grade
School Parent-Teacher Organization. Ms. Villalobos resides in Litchfield Park, AZ caring for her mother, and two children,
Michael Jr. (10) and Maximiliano (7).